Dating Jesus: A Story of Fundamentalism, Feminism, and the American Girl 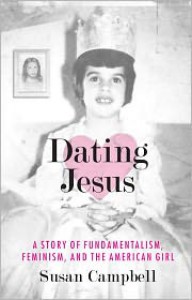 This book was really good.

This book gave me lots of feels, and made me think of things that I haven't thought in a long time.

I am going to be speaking about religion/spirituality and my own thoughts on it. Feel free to not read it, because I know that can be upsetting/triggering to people.

This memoir was at times hilarious, and at times serious. One woman's journey spiritually. It made me remember why I left the Christian faith as a whole. We had similar observations, but at the same time very different ones. The biggest one was that I never really did believe in Jesus as my saviour, and I'm not going to go through the whole act just to make people happy. When I left the church in all its forms, I felt for the first time free, especially once the nightmares started to fade. It took years even after that for me to stop being angry at those who manipulated me as a child to only "believe" out of fear. I am not an Atheist but I am not Christian, and that is possible. I identify as Eclectic Neo-Pagan with Celtic leanings, and also Agnostic to an extent, because intellectually God(s) cannot be proven or non-proven. Spiritually is not rational, it is subjective. I respect others, but I also expect the same respect. I was raised Catholic, but also spent some time in a Pentecostal/Evangelical churches. I could not be in a faith, that not only did I not believe in (and I tried), but hated me as a female and also as a queer person. I could not fake it anymore. I left at 16, and never looked back.

Campbell, and others discussed, say they miss Christianity simply because they always believed, and left because they felt the church as a whole hated them for either being queer and/or female. I understand where they are coming from, but in my personal experience, leaving the church has freed me. My personal views and spirituality is constantly evolving, and I think, for myself, that if I would have stayed in the church, my personal growth would have been stunted. Everyone is different, and I applaud that difference.

Anywho, to get this review somewhat back in track. Do I recommend this book? Depends. It was interesting. I enjoyed reading her narrative, and the history of Christianity, Feminism, and Evangelicalism, and how they sometimes were entwined. I related to some of it myself, and I think a lot of people will, as well. I would love to read more ex-Christian narratives, especially those who completely left the faith. I would not mind reading this narrative again, and those like this.