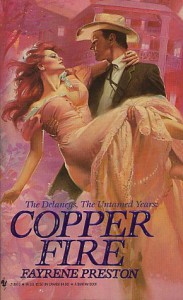 This was an odd, but amusing one for me.

-The love scenes were unique for sure. The hero has the ability to suck the energy out of you through your nipples. I lol'd out loud at that.
-There were traitorous bodies, to a degree.
-The novel ended on a cliff-hanger. I might have to get my hands on the next one.
-The heroine, Brianne, was actually okay for me. I like spitfires who aren't completely idiotic, imho.
-The hero was a knock-off Rhett (from Gone with the Wind) named Sloan.
-This was a quick read once I really got into this, though there were several plot lines that were never really finished in this one. It might get covered in the next book after this one. The kidnapping plot device of Brianne's brother ended disappointedly, and was never really given the proper denouement.
-Cover Snark: I would say this book took place in the 19th century, but the heroine is wearing 80's blue eyeshadow. I'm not an expert on makeup during the 19th century, but I don't think that was accurate.
-Brianne is also a redhead, I heart redheads. :D
-This one was actually light-hearted and trying to be funny; sometimes it was, sometimes it wasn't.