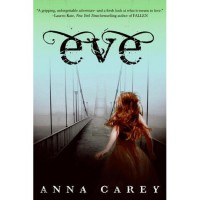 I would give this 3.5 stars. I am reviewing this for Traci, because she wanted my opinion on it so here goes.

What I liked: I liked the plot, it never seemed to drag. The writing itself was actually pretty good, in my opinion. I also loved the theme of dystopian futuristic society with a "boarding-school" twist. I'm a sucker for that. I will have to say the character who I wanted to read more about was not Eve, but Arden, her rival-turned-friend. She was intriguing and didn't fall flat to me. She felt more developed than Eve. She felt like the only really developed character in the series so far. The love story was pretty cute, but sometimes it irritated me at certain points.

What I dis-liked: I don't like her characterization; it feels a little flat and the main character, Eve, feels like a Mary Sue to me. Since this is the first book of the trilogy I will still give her character time to develop, along with other characters as well. The thing with Eve is that for someone as super-smart as she is she makes mistakes, while they push the plot along, and we all do make mistakes but I was talking to the book, like come on, that decision makes no logical sense. That irritated me, I guess it was supposed to be "realistic", but some of her decisions felt so stupid and I was like what the hell are you doing? The love story, okay spoiler alert, but Eve is almost raped, and her love interest saves her, and then when her would-be-rapist blames her, Eve says she is unsure if she wanted him when she knew that she didn't. The love interest actually asks her if she wanted the other man, and then storms off like a petulant toddler. Yes. I do realize that given the way these teens were raised why this could happen, but at the same time, I was like Logic, how does it fucking work? There was also a few scenes where Eve acted like a whiny petulant brat when the love interest pretty much states that he can't stay with her for Eve's safety and it's for her own good, and I'm like again, logic. He wasn't using you, girl, he is protecting you, he pretty much said it in those words.

Bottom-Line: This was a decent (other than a few things) fast read, and I would recommend it for a guilty-pleasure read that you shouldn't feel too guilty for (mostly) enjoying.
Tweet