REBLOGGED because plagiarism infuriates me!

Reblogged from Sad Books Say So Much:

Another week, and another plagiarism scandal. 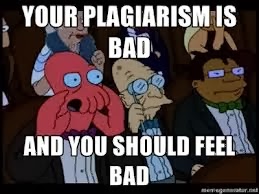 And I really don't understand it. If you're going to be a Cheaty McCheater pants, why do it the hard way? Because, frankly, if you're going to take the effort to grab together a bunch of fan fics and then try and edit them together into something cohesive...well, if you've got those skills, wouldn't it be easier just to write your own damn book?

And this advice is brought to you by the laziest person on earth, I swear.

The second instance was very much the tried and true method:

3. Slap a cover and your name on it, and sell it on Amazon.

This pisses me off a lot. It pisses me off on behalf of the readers who bought something in good faith, and it pisses me off because every time it happens it makes writers wonder if it's worth the trouble of putting their stuff out there for free. Eventually, everyone loses, because of one asshole who thought that stealing someone else's work seemed like a good idea.

[Rabbit's thoughts:I actually don't have a problem with people re-working thier own fanfics to original fic, but it's way different to steal from other fanfic, and then publish it.]
plagiarism sucks