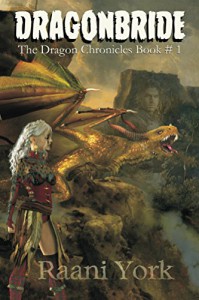 Thanks for posting the whole novel as the blurb, dear author, I don't even NEED to read the book now. :D

Note: This is about the BLURB not the
AUTHOR. :D

Shalima, “Daughter of the Light” and is born under special circumstances, is raised by her Aunts instead of her mother because she needs to be prepared to fulfil the “Old Scriptures”, which tell us, that she is the only Magician on Earth. Her Aunts carefully prepare her for her obligations and her duty: she will have to get married to the “Holy Golden Dragon”, the King of the Dragons, a huge Earth Dragon with magical talents. She is prepared by her “Master” in Magic and grows up with witchcraft in her life as normality. Her Aunts are witches.

She cannot believe that she is the “Chosen One”, who has to protect the Dragon Species, the Nature and finally the Earth. But when she turns a Teenager it seems, that the Old Scriptures are right. Compared to what she had thought, Dragons really exist.

The Earth-Dragon was a beautiful huge creature, growing in length up to 90 feet. His scales shimmered from emerald green over rust red until deepest black. There were some extremely rare examples whose scales showed an unexplainable purple, but obviously at the moment the „Red Earth-Dragon“became pronounced extinct.

The Water-Dragon was a conceited, extremely elegant creature, built a little bit smaller and more fragile than the Earth-Dragon. His scales went from silver grey over turquoise and ocean blue up to the deepest midnight blue, which gave him a sparkling cool beauty. By the development of his back legs to fins his suffered a little bit under the limited ability to fly, but in his element, the water, he was of unprecedented elegance. He only went for short flights and only for nutrition, since he felt most comfortable in his home under water.

The Fire-Dragon had hardly ever been seen by humans. He lived in places, unreachable for people, usually volcanoes or the burning inside of the Earth. There the Dragon-Father had his court and there also the rutting and intercourses took place, rituals never been seen by any human being. The colors of his scales went from lemon yellow over orange up to the darkest wine red. The Fire-Dragon had to take care for his scales with his oily spittle to beware them from drying out by the constant heat.

And finally there was the Holy Golden Dragon. He was a huge Earth-Dragon with scales shimmering like gold in the pure sunlight. The King of the Dragons. Smart, a little bit cunning, but good and protecting the humans... Only he had the right to father his descendants with a very special human woman. This woman was the only magician and was only born once in a century. As soon as the two were married the magician usually moved in with the Dragons to be with her husband and support him... She also protected the Species of the Dragons which was really in danger by the low hunt instincts of the human beings. Under hunters and warriors it was an absolute highlight to kill a dragon. The magician would also be the one protecting the Dragons and her husband the Golden Dragon, to protect the nature, fight demons and hold her hand over humans and animals...

After their marriage Shalima lives with her husband, the Holy Golden Dragon in the Dragon’s Empire and fulfils her duty when they discovered an old parchment roll which announced the End of the World. A terribly evil creature would overtake the Earth if they didn’t act. And they did act. They leave the Dragon’s empire to look for helpers, for keys to rescue the world and for their own little army to fight the evil. When the battle takes place the Holy Golden Dragon loses his life and the Dragon Species dies. Shalima is left back with the Dragon’s last present: His children...

review do not ever want did not read